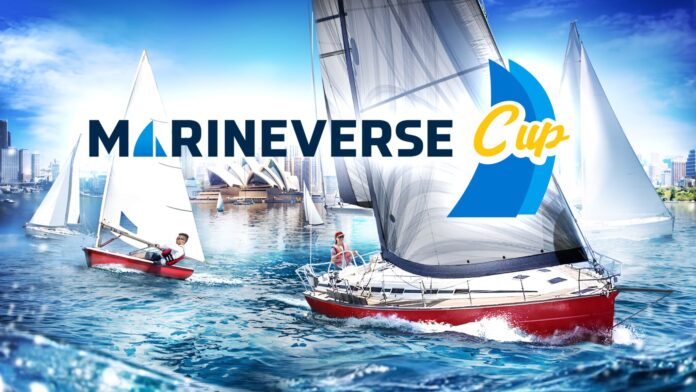 Upon opening MarineVerse Cup you’re greeted by a beautiful, calming vision of deep blue waters with hazy landscapes in the distance. There’s a sense the developer wants this sailing simulation to feel slightly exotic. This is amplified in the sound design, with splashing water that seems to wash up all around you, and the howling wind as you open up the sails.

The first impression is a good one; not only is the environment welcoming, but the tutorials are deep and expansive. However, sometimes first impressions can be misleading. The infinite blue of this ocean is truly infinite, there’s no sense of place beyond the landmarks in the distance. Sailing in one direction brings you to nothing but more water, shrinking the grand idea of sailing out into the blue.

The tutorials, while informative and helpful, are dry and can get rather boring after a while. That’s the feeling across the game generally – it starts well, then gets rather boring. For example, a large portion of the game is dedicated to racing.

Once you’ve chosen the craft you want to use – dinghy or yacht – you’re teleported to the water in preparation for the race. You wait a couple of minutes, edging close to the starting line, before finding the wind and dashing out towards a buoy marker. You circle the markers and head home to the finish line. At first, it feels exciting, but after a couple of minutes it’s tedious; there is no atmosphere, there’s no sense of racing against anyone but yourself because the bots are spread out, and then there’s the monotonous voice that constantly reminds you “the sail is flapping”.

Sailing is a niche activity and usually, these work well for gaming experiences both in and out of virtual reality, however, in this instance there’s just no spark. There’s no excitement beyond that first impression. This is, in part, because the game’s structure is so obtuse. There is no career mode, the multiplayer can only be played if you give over your email address by opening an account with the developers and the mini-games and challenges simply aren’t fun – there are only so many times you can sail to collect stars or fish.

At the moment, that multiplayer option is a little quiet. I had a handful of races and only in one could I link up with another person. Thankfully bots can be used to fill out the playing field and whenever you finish a race your time is uploaded to a leaderboard, giving a nice sense of competition.

MarineVerse Cup feels like a hodgepodge of ideas thrown together with no cohesion. Choosing races or tutorials is all conducted on a boring-looking board in the marina clubhouse, there’s no sense of scale. No grandeur, glamour, or adrenaline. In fact, the best thing in the marina hub is a cat that sits behind you meowing cutely. And yes, you can pet the cat.

I don’t want these flaws to sideline those genuinely interested in sailing in reality, however, I can’t imagine those die-hard sailors finding a lot to love here. Take the yacht as an example, there are several places you can stand on the ship – next to each wheel, at the center compass, toward the bow, or center of the stern. You can teleport to these by holding the trigger button.

But you don’t need to be stood at the wheel to steer, nor do you need to be sat to port or starboard to winch the sails. It can all be done from anywhere, with a few controller shortcuts. It completely removes any idea that you’re doing this in virtual reality, where actions make up the experience.

Which brings me to comfort levels. Personally, I rarely get motion sickness in VR nowadays, but here we’re combining seasickness with VR motion sickness. There are options to smooth turning and reduce some movement aspects, but after about 45 minutes of playing, I began to feel the creep of light-headed nausea. I tried playing standing and sitting, the latter is a far better experience, but neither eased the feeling.

I’m aware that I’ve been pretty negative about MarineVerse Cup, which frustrates me because there were some genuinely great moments, fleeting though they were. I loved sitting in the boat and looking up towards the sails as they billowed in the wind, and the feeling of catching the wind just right and hearing the air whip past was exhilarating. Though, as you’re probably sensing, these moments were few and far between. MarineVerse Cup feels more like a sedate Sunday at a boating pond, rather than the thrill ride of sports sailing.