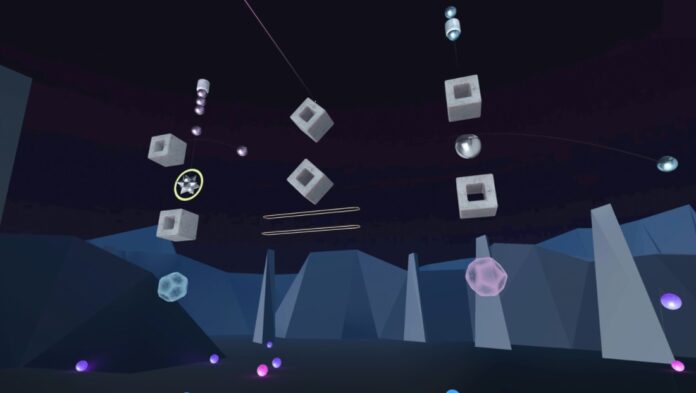 Being surprised by a game is probably the best part of this hobby. It usually only happens within indie development because triple-A publishers drown us in hype videos. Not that Spring, the game I randomly grabbed from the Quest AppLab, could be considered ‘hype’. It’s actually the polar opposite of hype, it’s sedate. Chill. Relaxed.

It’s a puzzle game that feels more like a meditation than a taxing drain on your grey matter. Each level is presented within a calming vista in a palette of soothing colors. A small cylinder begins dropping balls and it’s your task to maneuver them into a star-shaped exit. To do this, you use the objects given to you – cubes, wire ramps, tubes that blast the ball in a certain direction, and later, warp portals.

You’ll notice that there are dull grey spheres dotted around, passing the ball through these increases the star rating you receive at the end of the level. The interesting part of this concept is the balls have to stay moving in order for the exit to open. This means that each level acts like a Rube Goldberg machine, with marble-like balls plinking and plonking, bouncing and blasting from point to point.

There’s never any ‘correct’ answer to solving the puzzles, there’s no time limit, no necessity to pass through every sphere, or even use every item granted to you. Some levels are cleared with minimal solid cubes placed at intricate angles bouncing the balls with a satisfying arc through the air. Others are more complex if you choose to string together multiple objects.

Each level is interspersed with inspirational and motivational quotes, when these are paired with the landscapes and ambient soundtracks, it’s clear that this game is about more than completing each puzzle and moving on. Spring is an effort to immerse you within bite-size worlds and forget everything outside of your headset.

This is where virtual reality (VR) has the upper hand versus console and PC; while Spring would play perfectly well on a 2D plane, it’s the encompassing viewpoint that elevates this simple puzzler into a kind of mesmeric playground. I was amazed just how often I sat still listening to the satisfying pops of the sound effects and breathing slowly. Or, taking a step back to ogle my Goldberg-esque flow of the solution.

Everything seems to have a wonderful tactility, turning and rotating the objects is so smooth and the physics ensures that every action has a reaction. It makes solving the puzzle so much more satisfying when you’ve slowly tweaked the angle of a solid surface to create the best bounce of a ball towards a goal.

I had only two issues while playing; firstly, the tight view of the puzzle, which can feel a little too close. Playing in a small area will have you stepping backward out of the VR headset guardian zone while trying to encompass the full view. Secondly, a true sandbox mode would elevate the game making it more of a toy box, allowing players to set up elaborate mechanisms. But I can’t complain too loudly given the game costs nothing to play.

Spring was such a surprise; I expected an overly simplistic puzzler which I’d quickly tire of. In the end, I was replaying puzzles looking for new ways to solve them, or messing around with the objects like a kid with a new toy. It’s not going to tax the hardcore puzzle fans, but if you want something to transport you away and engage your inner child, Spring is a great distraction.
metaversepls