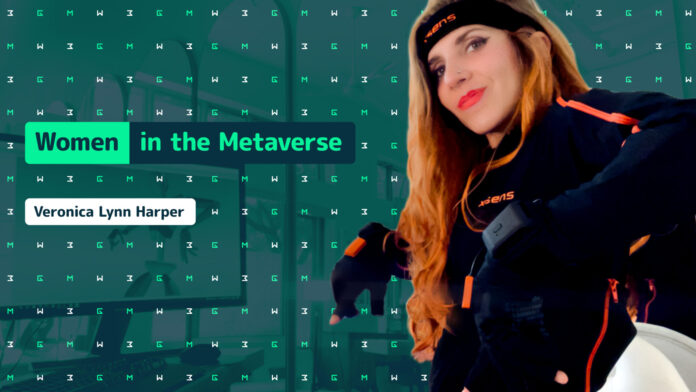 Multidisciplinary artist Veronica Lynn Harper knows no bounds. With over 15 years of experience in 3D character design and asset development, she’s worked with some of the gaming industry’s most notable trailblazers — including Sony, Electronic Arts, and Atari. She’s even hosted themed events for Disney and Blizzard and spoken on a panel for women at the Sundance Film Festival.

With Web3 on the horizon, Veronica’s next ventures include exploring new forms of digital storytelling and turning them into more immersive experiences. She’s already created a roster of digital collections — such as downloadable stories, an upcoming NFT collection, and much more.

As part of our ongoing series, we recently sat down with Veronica to chat about her humble beginnings, her upcoming projects in the Web3 space, and what her idea of a more immersive, opportunistic internet might look like one day.

From her earliest memory, Veronica recalls having a distinct passion for art and various forms of expression — whether it was through sports, dance, or creating things with her hands, voice or brain. From a childhood Disney fandom to attending Cirque du Soleil and Broadway musicals, she especially adored the stylization behind animation and how it was able to captivate audiences — even when the characters weren’t real.

Her passion for creative storytelling even persuaded her grandparents to bring her to MGM Studios — where she was able to watch creators “writing and drawing on the spot” and witness processes unfolding in real-time. “Once you study characters and emotions, it’s fun to create stories around them,” she says.

Veronica cites Dan Platt, an established character designer, and clay artist, as her first mentor. He guided her through tools and techniques of sculptural form, equipping her with the right foundational knowledge to kickstart a career in 3D design.

Today, she’s found a way to marry her earlier passions of storytelling, practical art, and 3D rendering. Amongst her latest projects are fine art statues, textiles in fashion, and creating digitized iterations of her work through VR, AR, and XR experiences.

Veronica has often been referred to as a “modern-day Rorschach”. Converging sight and sound, she uses music to induce a flow state and allows it to conduct her creation process, crafting visual iterations of each sound and its vibrational pattern. Depending on her audio of choice, her shapes will differ.

“Patterns teach people about flow state, passion, and what they’re doing,” she says. When detailing her process, she uses the analogy of a surfer riding a wave — when they’re able to “carve out a shape during flow state, they communicate with the water. Their design will be different, depending on how they’re in that space and in that moment.”

The same can be said for artwork: “If that’s translated in a pure way without any thoughts breaking up the flow state, you’ll get the truest, most real thing in that experience.”

Veronica has tried to practice on her own materials with music, quickly digitizing pieces and creating patterns that she feels will be easily transferable within various different industries (such as interior design, digital 3D stories, fine art, or collectibles). She has also deployed different music genres to guide her work — including tropical house, jungle bass, psytrance, EDM, dubstep, and hip-hop.

By applying sound patterns to fashion, she’s seen this as a good way to measure whether her viewers will connect with them as intensely as she has. “You can make rad art and nobody feels anything, but I like to make art that other people have experienced things from — [art] that has made them feel more connected or that has given them something in return.”

Veronica has painted for several DJs at major music festivals (such as Lightning in a Bottle and Envision) — work she cites as some of the greatest experiences in her career thus far. In the last year, virtual concerts have become all the rage — with artists like Ariana Grande, Travis Scott, and most recently, the Foo Fighters taking to metaverse stages to reach wider and more diverse audiences.

In light of this, one of Veronica’s next projects includes dressing DJs and other musicians on stage with clothing that will bear the patterns of their musical genius. However, she’d also like to achieve this within a metaverse space, driving visuals with her motion-capture suit and building 3D assets that can be digitized and live anywhere. Having recently consulted with Nike about carrying her concepts into virtual spaces, she’s learning both digital and practical pipelines — which make her comfortable with art-directing for both physical and digital realms.

To Veronica, the flow state is “harmony between mind, body, and energy, as well as mental and physical health.” Her relationship with movement and sound has formed an ideal foundation for her upcoming NFT collection, which features stunning, almost-pearlescent visual stills of her movement in stasis.

To create these images, Veronica works with various motion capture partnerships — one being OptiTrack, a motion-based capture system — and the other being Xsens, a type of wearable equipped with inertia-based sensors. Her motion capture gloves, which capture stunningly nuanced hand movements through the support of machine learning, are produced by the team at Stretchsense.

She’s also partnered HTC Vive and Faceware for all of her facial animation work. Additionally, she is a huge supporter of Wacom and Logitech — all while developing visuals with software Maya, Substance, Photoshop, Zbrush, Marvelous Designer, and Clo3d.

On the topic of building a more inclusive internet, Veronica has stressed the importance of a digital workforce —, particularly in a post-COVID climate. “If you can do anything web or digital-based, your survival rate is better. Especially for countries that don’t have drivable access to studios for sustainability,” she says. By continuing to form and hold new partnerships, she hopes to experience new tech and showcase new ways for it to be used.

Like many women in tech, Veronica also speaks of being a female minority throughout the course of her career. Having worked in the games industry for over 15 years, she recounts being one of three females in a team of 500 asset developers at Sony and one of 250 women at Electronic Arts. In recent years, she’s been pleased to see more women join the gaming space — an effort she’s always been eager to support.

Going forward, Veronica hopes to see a version of the internet that is open to everyone of all backgrounds, sexual orientations, ages, and identities. Moreover, she notes that the very nature of the metaverse is all-inclusive — meaning that it should continue to bridge both practical and digital worlds. In Web3, “tech will continue to evolve and it is at the voice of the people.”

Her advice to other women? “If you want something to change or be different, apply to a team where you feel something is missing.”

Some of Veronica’s most recent work includes a project with leading design firm Gensler, where she’s providing upcoming visual content for buildings with built-in digital media, a large AT&T wall in Dallas’ Discovery District, and other upcoming public installations projects.

She’s also the mastermind behind a series of bespoke 3D renderings — including a character named Bunnii — which she’s brought to life in Unreal Engine’s MetaHuman Creator. She plans to animate her renders with her motion capture gear.

Currently, Veronica is seeking partnerships for art installations for public art, museums, events, conventions, or stage performances — whether that’s on a digital or a practical stage. She’s even in the midst of working on an XR stage in Unreal Engine, where she hopes to recreate the same energy she’s sparked at real-world gigs.

Previous article
Meta Launches Metaverse Tradition Sequence In Horizon Worlds
Next article
HTC’s Imaginative and prescient of the Metaverse is Heavy on Buzzwords, Gentle on Substance – Street to VR