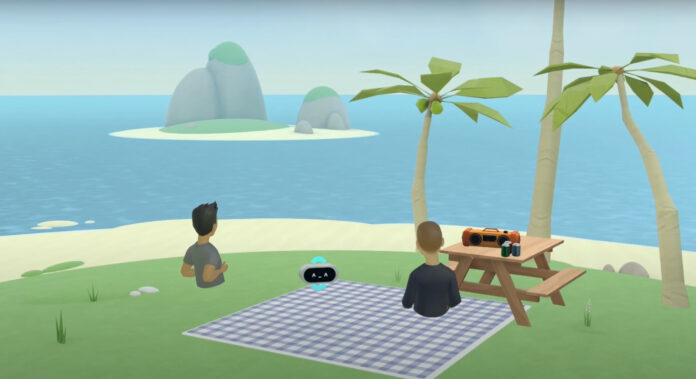 This week Meta (formerly Facebook) held its “Meta AI: Inside the Lab” event which showcased how the company is developing artificial intelligence to tackle a range of use cases, one of which is building its metaverse vision. CEO Mark Zuckerberg revealed a concept called BuilderBot, designed to create worlds simply using your voice.

In the demo video which begins in a plain, gridded environment, Zuckerberg starts by saying: “let’s go to a park.” This creates a fairly plain park-like environment with a green base and a couple of trees. He then changes his mind, saying “actually, let’s go to the beach,” prompting BuilderBot to create a far more attractive desert island scene.

He then follows this up by populating the scene with clouds and another island, prompting the AI with “let’s add an island over there,” pointing into the distance. A colleague in the same virtual space then continues to add further adornments, from stationary objects like a picnic bench and a stereo to ambient sounds like seagulls and waves.

If you didn’t know Zuckerberg loves hydrofoils, so he added one of those in there too. While the process looked fairly smooth no further details were provided regarding BuilderBot’s abilities, just that the tool would help “fuel creativity in the metaverse.”

BuilderBot may come in useful for creators in Horizon Worlds, for example, who may benefit from the ability to quickly iterate using their voice. However, the aesthetics were very plain and simple, so the tool might not scale as well for developers looking to build more complex scenes.

It’s not the first time Metaversepls has come across voice command world-building. Anything World is a platform that not only allows you to build 3D experiences using machine learning, you can also animate models as well. One up on BuilderBot.

Whether Meta releases BuilderBot to the public or it just stays as a concept remains to be seen. As further details are released, Metaversepls will let you know.