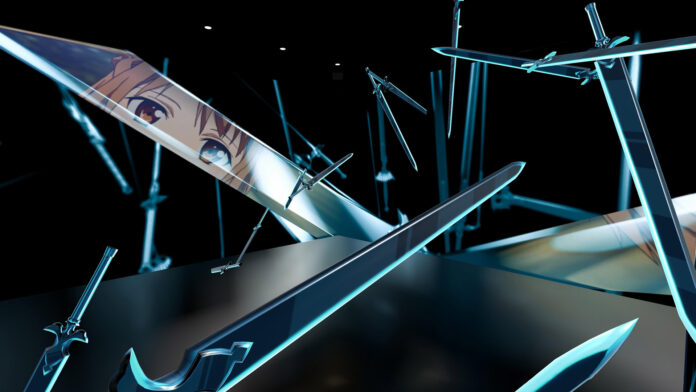 Sony is hosting an official Sword Art Online fan exhibition in VR from today through March 10th. The event drops players into a familiar setting to celebrate the iconic anime with interactive exhibits, immersive clips from the show, and even a live performance.

Sword Art Online is easily one of the most popular anime ever to be based on virtual reality. In the show characters don so-called ‘full-dive’ VR headsets to join a VR MMORPG. But what they thought was just a fun game turns out to be a life or death struggle when they learn they have no way to log and if they die in the game then they will also die in real life.

First aired in 2012, the fictional events of the show were set in the year 2022. Here we are now, finally in 2022 for real; and while we still don’t have full-dive headsets, Sony felt the year warranted a proper VR celebration of the anime which has become one of the most iconic pieces of virtual reality media in the last decade.

The event is free-to-play, but about two-thirds of the content can only be accessed by ticket holders. Tickets to the event are priced at about $33 (¥3,800). Though it can be attended through mobile devices and non-VR too, the creators say the event is designed primarily with VR in mind.

Inside the app, players will find themselves in instances of up to 20 participants exploring the exhibition which is set in venues inspired by familiar Sword Art Online scenes, like the ‘Town of Beginnings’, ‘Aincrad’, ‘Ocean Turtle’, a Rath research lab, and an interactive ‘boss battle’. You can see a breakdown of each exhibit here.

There will also be a “unique live performance” by artist ReoNa, the voice of several theme songs from Sword Art Online: Alicization, the third season of the show. The performance will be held for ticket holders on March 5th at 9 PM PT (your timezone here). Sony says it’s using motion capture to bring ReoNa virtually into the venue for the performance.

Sony will also be selling unique Sword Art Online merchandise which appears to be limited to the sale during the event. In addition to physical goods like posters and shirts, the event is also selling the digital avatars featured in the exhibition, giving users the ability to use them outside of the event.

If you’re interested in checking out the event in VR or non-VR, see the ‘How to Play page for details. Sword Art Online: EX-Chronicle – Online Edition is officially available in Germany, Hong Kong, Japan, Korea, Macau, Singapore, Taiwan, Thailand, the United Kingdom, and the United States.