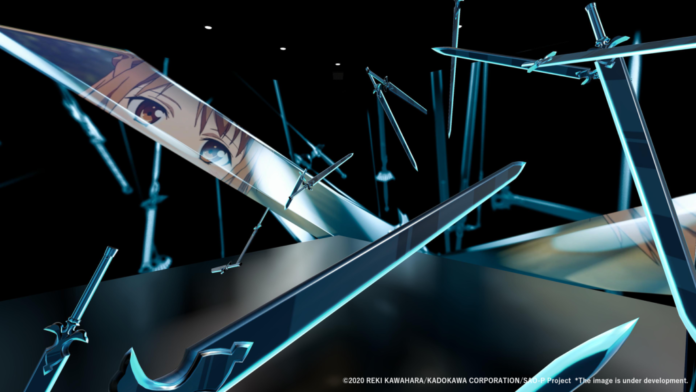 Attendees begin their journey in the “Town of Beginnings,” a free area featuring interactive weaponry as well as a giant screen displaying the show. Here you can socialize with other fans 100% free of charge, check out different exhibits, and teleport to other parts of the event space.

Speaking of free, there’s also a complimentary Boss Battle where you can team up with other players and take on The Skull Reaper. Those who defeat this powerful foe earn the chance to have their names engraved on the stone monument located at the center of the Town of Beginnings.

This free event is available to VR users and gaming PC users. For an additional fee, you can unlock even more exciting content to enjoy. In the Underground Labyrinth, for example, you’ll find an exhibition area featuring an immersive audio-visual experience as well as a four-sided theater that’s been generating tons of buzz on social media.

The Iron Castle, on the other hand, is based on the floating castle of Aincrad and traces the history of Sword Art Online according to its creator, Reki Kawahara. Finally, there’s the Research Facility, a sprawling digital structure inspired by the Rath research facility. Here you can check out an exhibit dedicated to the Alicization series as well as War of Underworld.

In celebration of the event, Sony Music Solutions is hosting a “mini-live performance” on March 6th at 2pm JST that will feature a mixed reality performance by ReoNa brought to life using a combination of motion capture technology and a virtual camera system referred to as “jeannedarc.” The Japanese singer has sung many SAO-related songs in the past. Anyone with an admission ticket will have access to this unique live event.

Sword Art Online -EX-CHRONICLE- Online Edition kicks-off Tuesday, February 22nd at 1:00 pm JST and ends Friday, March 11th at 4:59 pm JST and will be available in Germany, Hong Kong, Japan, Korea, Macau, Singapore, Taiwan, Thailand, United Kingdom, and the United States. Attendees can access the event in VR using a PC VR headset like the HTC Vive, Oculus Rift S, and Meta Quest 2 (only compatible with Link) or in standard 2D via a PC or smartphone.

Those in VR will have access to additional immersive content, including the ability to interact with objects like ropes, boulders, ladders, and weapons using their motion controllers. You can enter a random venue by yourself by selecting “enter the venue randomly” or alongside friends by selecting “play with friends.”

Visit here to get started. You can also learn more by following @SAO_EXCHRONICLE on Twitter or subscribing to the official YouTube channel.