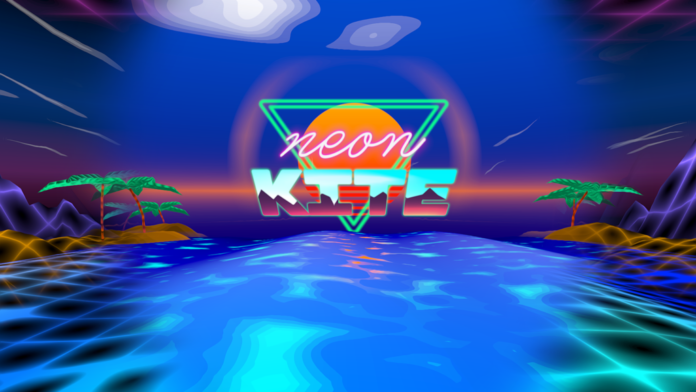 A free demo of Neon Kite is available now on the Meta Quest.

I love extreme sports as much as the next adrenaline junkie, but I’ve never been brave enough to try kiteboarding. For those unfamiliar, kiteboarding is an extreme sport in which a rider harnesses the power of the wind using a special kite to travel over water, snow, or sand. Experienced “kiters” are capable of catching serious air, the highest recorded jump being an incredible 93 feet.

You can see how one might be a little hesitant to strap themselves into a harness and hit the open water. Thankfully using the power of VR we’re able to experience all the excitement of this up-and-coming adrenaline sport minus the risk of life-threatening injuries.

Available now on Meta Quest headsets via the App Lab, Neon Kite is an ultra-satisfying kiteboarding simulator inspired by the Synthwave genre. Using your Touch controllers, you control your own virtual power kite as you coast through a retro environment littered with half-rendered mountains and beaches. Much like real kiteboarding, you have the ability to perform massive jumps by pulling back on both handles while hitting a wave.

The game features several different game modes, each with its own unique objectives. Casual mode allows you to explore the retro environment at your leisure without having to worry about an objective or time limit. Arcade mode has you racing through a series of targets before time runs out. Survival mode puts you at the mercy of an enormous sea beast. Regardless of which style of game you choose, Neon Kite promises to offer an addicting gameplay experience.

One of the most alluring aspects of VR technology is its ability to immerse you in exotic situations too expensive, impractical, or dangerous to replicate in the real world. This includes everything from traveling to faraway locations across the world to battling hordes of flesh-hungry zombies. Neon Kite is just another example of VR technology taking us to new and exotic places.