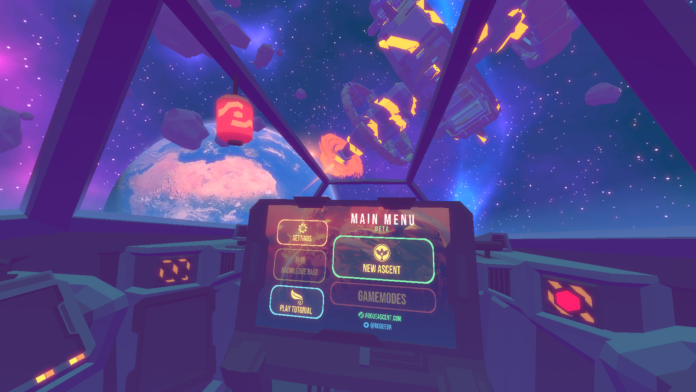 Rogue Ascent VR is a killer-looking VR shooter that makes use of Quest hand-tracking technology to immerse you in a sci-fi adventure where you use your bare hands to blast your way through multiple action-packed levels.

Like other games published by Clique Games, such as Coffin Rot Brewing Co and VR Dodgeball Trainer, Rogue Ascent VR was created specifically with Quest hand-tracking in mind. To access your weapons you just hold up your hands and make the classic “finger guns” gesture.

Created by Purdue University Grad Jordan McGraw, Rogue Ascent VR features a simplified combat system designed specifically for hand-tracking controls, including autofire mode and homing projectiles. There are some other fun weapon controls that you’ll need to master with your hands, but you’ll have to play the game to find out how they work. We don’t want to spoil everything for you here.

You also have the ability to pull up a shield to protect yourself when the enemy has you pinned down. Simply hold your fists in front of your face as if blocking a punch. This digital shield will block and reflect any projectile coming towards you. Just keep in mind that your shield gets weaker the longer you use it.

The game features a wide variety of other hand-tracking controls unrelated to combat. You can reach out your hands to open a portal that you can use to teleport across the room, wave them over a sensor to open doors, and more.

A simple turn of your wrist will launch a menu you can navigate using a pinching motion with your other hand. Here you can access things such as weapons, supplies, or options to get you through the level.

The gameplay for Rogue Ascent VR is just pure fun. The neon-fueled visuals are captivating and the action is relentless. The gameplay is fast, but not too fast for Quest’s hand-tracking technology, which still features its fair share of limitations. An awesome soundtrack makes it a non-stop action game while killer sound effects mean you don’t have to yell “pew pew!” every time you shoot your weapons.

There are also a few secret levels you can access throughout the game. Here you’ll find a ton of really cool weapons, lots of gadgets, mods, unique abilities, and power-ups that you’ll need to use to take out teams of foes as they come at you.

Each level brings new achievements and bigger challenges for you to overcome. You’ll have to combine the abilities that you learned from previous levels to battle everything from humanoids and drones. In order to avoid detection, you’ll need to take out sentry turrets and security cameras. You can even interact with the station systems and turn enemies against each other.

To bring an additional sense of competition to the game, Rogue Ascent VR uses a global leaderboard where you can post your score and compete against other players. There are also different classes and game modes you can jump into to keep the game feeling fresh.

Rogue Ascent VR is currently available through SideQuest or through the Clique Games website. Join their Discord to engage in conversations with the developers and other players.